Tribal Council Not Impressed with GM Cleanup So Far; Project Expected to Wrap Up Next Year 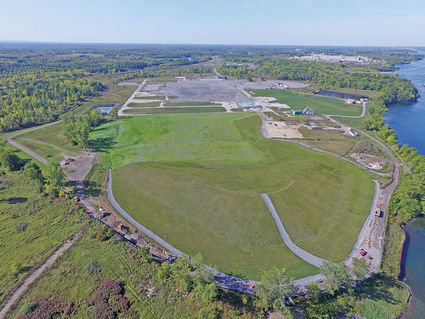 Above is the former General Motors site in Massena in the fall of 2016. Photo submitted by RACER Trust.

MASSENA -- Despite the Environmental Protection Agency's projection that the former General Motors cleanup should finish by next year, the St. Regis Mohawk Tribal Council remains unimpressed with the effort so far.

"We expect to complete most of this work this year and during the first half of 2018," RACER Spokesman Bill Callen said. "The work schedule is largely weather-dependent, so it's impossible to say with any certainty when the work will be complete. Mid-2018 is a good ballpark estimate."

The EPA says they have taken steps to prevent GM contaminants from working their way east, but the St. Regis Mohawk Tribal Council says the agency is not listening.

"In 2015, cleanup work included creation of a 150-foot landfill setback – a waste-free buffer zone along the Tribal border and the St. Lawrence River," EPA's statement said.

Of the contaminated sediment removed from the river, 16,900 cubic yards came from Turtle Cove and the surrounding area, which is on tribal property, the agency said.

The St. Regis Mohawk reservation is downstream from the site. Tribal leaders for years have advocated for a thorough cleanup so the community is not exposed to PCB and other toxins being carried from the GM site downstream or through the air.

"For years, the Saint Regis Mohawk Tribe has voiced our community's frustration in regards to the consultation process used by the EPA for the selection, implementation, and monitoring of the remediation methodology at the former-General Motors Superfund Site. Despite the fact that we have met with EPA officials numerous times and provided them with reasonable recommendations for a complete cleanup, which will improve the environmental and public health of our community, our community's concerns and knowledge of the river were completely disregarded," tribe spokesman Brendan White said in a prepared statement.

He says part of the cleanup exposed the Akwesasne community to airborne PCB.

"Even more concerning is that since EPA's mitigation plan was put into action, new research has been published demonstrating that EPA's mitigation efforts are not only insufficient, but are causing an even greater exposure to these contaminants. When EPA placed PCB-contaminated sediment on the banks of the river to dry, these PCBs evaporate into the air and are carried directly towards our community," White said.

EPA says they created a waste-free buffer zone between the site and tribal lands.

However, White said the PCBs from the site, both by air and water, are causing severe health problems in the Mohawk community.

"In failing to properly mitigate these sites, our water and our air where we reside is being contaminated by hazardous PCBs and other volatile organic compounds. This is contributing to a disproportionately high prevalence of diabetes, thyroid disorders, asthma, arthritis, autoimmune disease, heart disease and cancers. Research also shows that PCBs are transferred through breast milk--exposing future generations to a toxic legacy and negatively impacting the ability of our community to reproduce," White said. The Saint Regis Mohawk Tribe is not bound by an estimated completion date of next year and we will continue to advocate through all political channels for the full cleanup of the site including the removal of the industrial landfill."

The site is being cleaned up with funds put into the RACER (Revitalizing Auto Communities' Environmental Response) Trust by General Motors after a 2007 bankruptcy court settlement. GM bought back all the properties they wanted to keep and the rest, 89 locations in 14 states, were given to RACER. Most of the cleanup money went to the Massena site, just over $121 million.

Callen says the Trump administration's recent order that the EPA issue no new grants or contracts will have no bearing on the GM site remediation.

"The temporary pause on some EPA contracts and grants is not expected to apply to Superfund cleanup efforts that are underway. The Superfund program operates on the principle that polluters should pay for the cleanups, rather than passing the costs to taxpayers," said David Kluesner, EPA Region 2 chief of public outreach. "The GM Massena site has mostly been funded by parties liable for the cleanup and the EPA expects that work to continue. The EPA fully intends to continue to provide information to the public. A fresh look at public affairs and communications processes is common practice for any new administration, and a short pause in activities allows for this assessment."

Callen said there are three main jobs left. They need to remove and remediate the storm-water lagoon (which is visible in the upper right side of the above photo, just south of the riverbank) and associated structures. They need to finish installing a groundwater collection, treatment and discharge system. They also need to place clean soil and grass cover over approximately 59 acres, engineered and graded to promote natural storm-water runoff, according to Callen.

They have completed several large projects on the site over the last few years.

The main manufacturing building and various smaller buildings have been demolished. The main plant foundation slab has been removed and necessary sub-slab basement and soil excavations are completed.

The north and east disposal areas, including process lagoons, have been excavated and backfilled with clean soil fill.

The industrial landfill was reconfigured to be set back 150 feet from the property line and the St. Lawrence River. A new permanent synthetic cap and soil covering, which Callen says meets RCRA standards, is now in place (see foreground of the above photo).

"All of the above tasks achieved compliance with the cleanup standards established by the United States Environmental Protection Agency, which ordered the remedies long before RACER Trust took ownership and oversees our cleanup activities," Callen said in an email.

In 2014, RACER and EPA officials announced the site was 250 percent more contaminated than originally anticipated. They discovered hundreds of thousands of tons of soil contaminated with polychlorinated biphenyls (PCB), in concentrations has high as 500,000 parts per million - 50 percent pure PCB - in some areas. Federal regulations call for cleanup at 10 parts per million.

"In total, more than a half million tons of PCB-contaminated materials have been removed from the site since RACER Trust assumed ownership," according to a statement from the EPA. "While in operation, various industrial wastes were generated and disposed of on-site. Contamination is located in two disposal areas (the North Disposal Area and the East Disposal Area), an industrial landfill and four industrial lagoons. PCBs have been found in the groundwater, on- and off-site soil and sediment in the St. Lawrence and Raquette rivers, Turtle Cove and Turtle Creek. Groundwater was also found to be contaminated with volatile organic compounds and phenols have been detected in lagoon sludge, as well as in the disposal areas. Public water supply systems have not been impacted."

The industrial landfill and east disposal area were capped. The cap is made of six layers that go down about 27 inches, which is on top of a layer of subgrade covering the contaminants.

The cleanup also removed 21,389 tons of scrap metal, which was recycled; 2.6 tons of asbestos; 59,000 tons of contaminated waste that was not classified as hazardous, but was removed and disposed; 23,000 tons of PCB-contaminated sediment dredged from the St. Lawrence River; and treated 21.2 million gallons of remedial wastewater, EPA said.