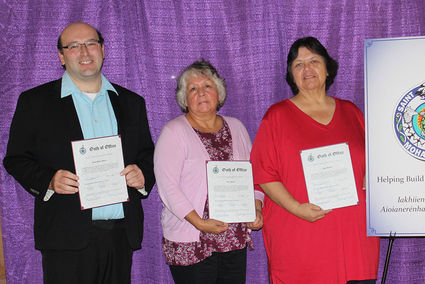 On Seskehkó:wa/September 16, 2016 the Saint Regis Mohawk Tribe's Office of the Tribal Clerk administered the Oath of Office and expanded the Election Board to five members, which includes incoming members (from left) Joseph Bowen-Brewer, Debra Martin and Hope Wheelock.

Akwesasne, NY - On Seskehkó:wa/September 16, 2016 the Saint Regis Mohawk Tribe's Office of the Tribal Clerk conducted a swearing-in ceremony as Tribal Council appointed three tribal members to the Election Board in accordance with Tribal Council...