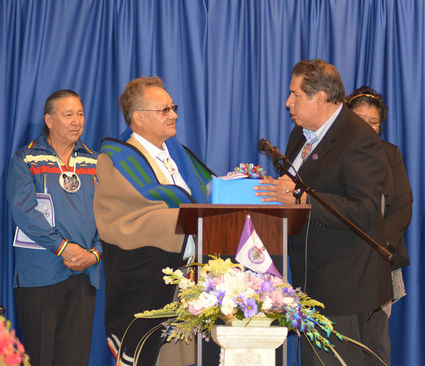 Moments before the actual Swearing-In, visitors from the Seneca Nation of Indian presented former Tribal Chief Paul Thompson with a gift of a beautiful blanket. The Seneca Nation of Indians also presented gifts to Sub Chief Jacobs, Tribal Clerk Betty Roundpoint and Chief Eric Thompson. To the far right is President Maurice Johns who remarked how he fell in love with Akwesasne and how his visit here was outstanding. President John's working relationship lead to honoring former Chief Paul Thompson and he looks forward to continuing to build a strong relationship between the Senecas and Mohawks. He stated, "We have one thing in common – we are all Ohnkwehonwe. I admire the Mohawk people greatly". Next to President Johns is former SRM Tribal Chief Paul Thompson, who is the longest serving chief on record, and far right, presenting to Paul Thompson is Cattaraugus Councilor, Rick Jimerson.

The Saint Regis Mohawk Tribe recently held their Swearing-In Ceremony and celebration at the former IGA building on Wednesday, July 1, 2015. Despite the cooler than normal weather, spirits were high as Brendan White, Director of Communications,...