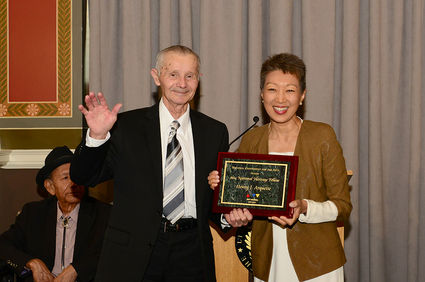 National Endowment for the Arts Chairman Jane Chu presents a plaque to 2014 NEA National Heritage Fellow Henry Arquette at the NEA National Heritage Fellowships Awards Ceremony on September 17, 2014 at the Library of Congress. At the ceremony, Chairman Chu read the following citation about Henry Arquette: "From Hogansburg, New York: A master shaper and weaver of wood, steeped in the tradition of black ash basketry of the Mohawk tribe. A retired ironworker who traded the sound of pounding metal in the urban landscape for the rhythm of pounding logs in the Adirondack forest. A teacher who passes on to the youth of his community not only the skills of weaving baskets but also the value of conserving our natural resources for future generations. For his contributions to the artistic excellence of Mohawk basketmaking, the National Endowment for the Arts honors Henry Arquette." Photo by Tom Pich.

On Wednesday September 17, 2014, henry Arquette was one of nine artists that were honored by the National Endowment for the Arts with a National Heritage Fellowship Award in Washington D.C. Art...