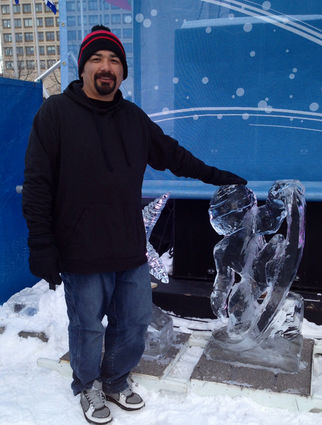 Ryan Hill stands in front of an ice sculpture he carved - he was given only 30 minutes to carve this piece. He completed a large ice sculpture piece that was entered in the Winterlude Ice Sculpting Contest and contributed his skills on another piece with several other artists.

Ryan Hill, a local artist originally from Six Nations, participated in his second Ice Carving Contest as part of Ottawa's Winterlude 2014. The Winterlude Carnival runs from January 31, 2014 to February 17, 2014 – so there's still time to catch v...