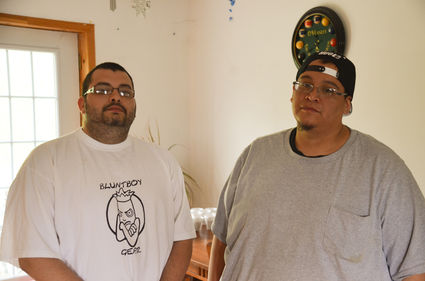 Matt “Big Worm” Mitchell and Hunter White are two Hip Hop artists from Akwesasne. Together Big Worm and Hunter are R.E.D.D., and just recently celebrated the release of their first CD, “The Rez Ryder LP.” Worm and Hunter are from Snye, Quebec and if you haven’t caught them at their many shows then first make yourself acquainted with their CD, and find your way out to a show. On first listen, I found “You Aint Like Us,” a track off their new CD, to be a throwback to a better era in HipHop, full of braggadocio and tight lyrical delivery, right off I was caught up in the song.

“I use music as a way to reflect on my own personality – every time I do music its personal, it’s nothing just to be doing it,” said Big Worm about his reasons for making his art. “The majority of our music is all a message, it’s pretty much from life experiences and that’s what drives me to make music.”

Big Worm and Hunter both talked about how the structure of the CD also follows a similar path, showing their journey in this two and half year adventure, starting out lighter, and growing more serious and focused, just as they have over their journey. Now on the other side, they are seasoned and know this is the path they were supposed to embark on.

“The reason why I do it is just that I always liked poetry. With the poetry of hiphop, I used to listen to a lot of Tupac growing up, so I already had that love for hiphop. And with the poetry sections in high school, that was the only subject in school I really liked,” said Hunter.

Once Hunter graduated high school he went at the music game hard. Recording and working on things. Between the two of them they had projects and mixtapes they worked on, and are looking to put out another mixtape soon.

Worm came back from Audio Engineering School and was even putting out singles while he was out there. Once they came together they performed as the Rez Rydaz, but changed their name recently.

This dynamic duo has performed with the likes of Slaughterhouse, Pharaoh Month, Joell Ortiz, and many artists from Canada’s Vibrant Hip Hop Scene.