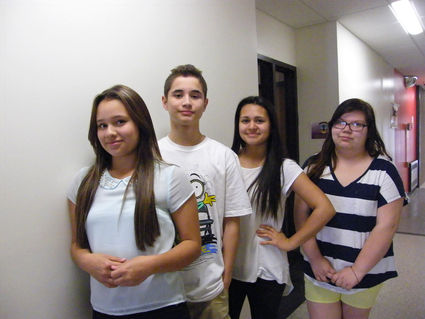 Salmon River Central Native Film Students recently won 3rd place in the video contest, “Speak the Truth To Power.”  The topic of their video was bullying, and it was centered around the Human Rights Defender, Jamie Nabozny.  Their video featured the “Skennen Ratihawi” initiative at the Mohawk School, with an interview of Angela Elijah, as well as footage from the tree planting at Salmon River.  It also included a dramatization of a student being bullied.  The students who produced the film were: Sierra George, Tristen Thompson, Kiana Thompson and Victoria Thompson, all students in Katsitsionni Fox’s Native Film Class.  Katsitsionni said, “I am proud of their great work!” Salmon River’s video was one of 225 films submitted from 40 New York State School Districts. The “Speak Truth To Power” judging panels were composed of over 30 active/retired New York State Teachers; and staff from NYSUT, The Robert F. Kennedy Center, and the Tribeca Film Institute. The grand prize winning video will be shown at the Tribeca Film Festival on April 25th.

The “Speak Truth To Power” student video competition encourages middle and high school students to become engaged in human rights. The video contest is sponsored by the New York State United Teachers (NYSUT) and the Robert F. Kennedy Center for Justice and Human Rights (RFK Center) and is based on Kerry Kennedy’s book “Speak Truth To Power.” Jamie Nabozny was verbally and physically bullied for being gay while growing up.  He eventually won a landmark federal lawsuit against the school administrators who failed to stop the harassment. He now speaks out for the millions of kids bullied in schools every day.

Winning videos can be found on http://www.speaktruthvideo.com.