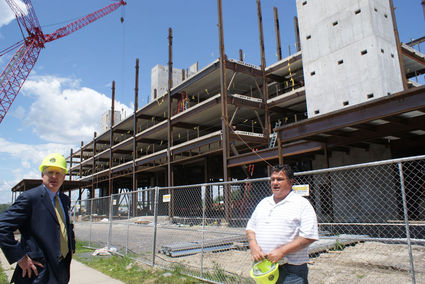 Last Thursday the Akwesasne Mohawk Casino opened its doors to the media and had a great turnout. Media were given access to the hotel, casino, and buffet constructions. The tour was hosted by General Manager Patrick Bassney, Encompass Ronald James, Tribal Chief Ron Lafrance Jr. and Public Relations Manager Benjamin Herne. The Casino is in the process of constructing a 7-story, 150-room hotel complete with swimming pool and spa, a new entertainment lounge, an expanded gaming floor and a complete renovation of the Native Harvest Buffet.

Chief Ron Lafrance Jr. commended the ironworkers, who work so efficiently, the minute steel comes in it’s up in the air. There are about 132 local workers onsite including Ironworkers Local 440, Akwesasne Earth Movers and Running Deer Construction to name a few. The project adds 156,000 square feet.

The hotel will be opening March 1, 2013 and will have deluxe suites and three multi-purpose meeting rooms, which can convert to one large banquet space that can accommodate up to 300 people. The Mohawk Bingo Palace will also make its move into the former Cascades area on March 1. The casino renovations will be complete in April 2013 and the expansion includes a high limit gaming area, a center bar including fire places and an entertainment area where they hope to get live entertainment for their guests.

Also new is the RV Park. The Casino wanted to give their RV patrons somewhere to park other than the regular parking lot. The new RV Park is now open and although there are still some finishing touches in the works, there are about 19 spots that are equipped with power and water hook ups.

The brand new buffet will have a grand opening on June 29, 2012. Of the buffet Patrick Bassney said, “It’s a big departure from our former buffet, this will rival any Las Vegas buffet you’ll see on the Las Vegas Strip.”

When it’s all said and done, the Casino will employ a total of 900 people. 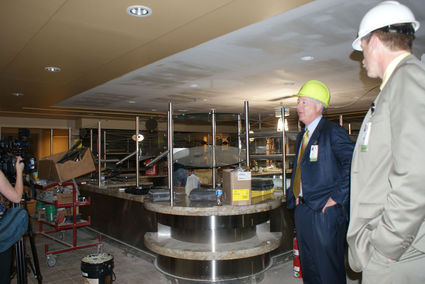