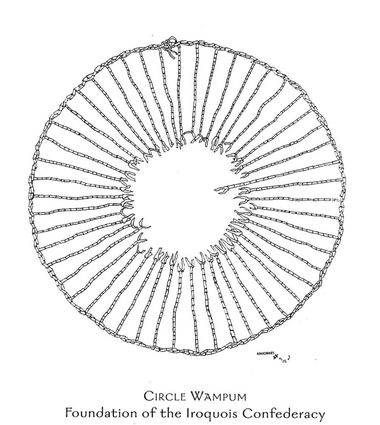 To most people a wampum belt means any beaded belt made by Indians. Glass beads were introduced by white traders, and with these the Indian people did beautiful embroidery work. Before the introduction of glass beads, embroidery work was made with porcu­pine quills. The long hair from the bell or chin whiskers of moose was also used. With the introduction of the crude glass bead, the far more artistic porcupine quill and moose hair embroidery became a lost skill.

The true wampum bead was not made of glass. Along the Atlantic coastal waters from Cape Cod to Florida is found the quahog or round clam shell. Using this material the coastal Indian peoples made wampum beads. These were long, cylinder-shaped beads about one-fourth inch long and one-eighth of an inch in diameter in both white and purple. In ancient times wampum was strung on thread made of twisted elm bark. The word wampum is an Algonquin Indian term for these shell beads used by the Indians of the New England states. In the Seneca language it is called Ote-ko-a, a word that is the name of a small fresh water spiral shell. “Wampum” is the name that has sur­vived to the present day. The early Indians of the Atlantic seaboard used this white and purple wampum for personal decorations as well as for trading purposes. Belts, wrist bands, earrings, necklaces, and headbands of wampum were observed by early white colonists while visiting New England Indians. The Indian people originally drilled this wampum shell with stone or reed drills. Later, iron drills were substi­tuted.

Long Island Indians were especially skilled at manufacturing wampum. The process was simple, but it took long hours of practice before one was good at it. It took a great deal of patience and labor to make these beads. First the shell had to be broken into white or pur­ple cubes. These cubes were clamped into a fissure split of a nar­row stick. This was placed into a larger sapling splint in the same way. They were put on a firm support and a weight adjusted to cause the split to grip the shell firmly, holding it securely. A drill was braced against a solid object on the worker’s chest and adjusted to the center of the cubes. A pump or bow drill rotated the drill. From a container placed over the closely clamped shell cube drops of water fell on the drill to keep it cool. One had to be careful that the shell did not break because of overheating caused by friction. According to Iroquois tradition, peach pits were broken and boiled in water. The resulting liquid made the shell soft during the drilling process. When a hole was drilled half way through the shell, it was reversed and a hole was drilled from the other side. The next part of the process was to shape and smooth the outside of the wampum bead. The beads were strung on lengths of thread or string and worked back and forth in a grooved stone. Five- to ten-foot lengths of wampum could be made in one day.

Even European settlers became wampum makers, and the first money of the American colonists was wampum. Wampum has often been called the money of Indians, but this is not true. Indians did not use it as currency in any way. By 1627 the Dutch were busy making counterfeit wampum. As late as the year 1875, a German community in Bergen, New Jersey, was busy making wampum for trade with the Indians.

At first only the coastal Indians had wampum. The east end of Long Island was the original seat of wampum trade. The Narragansett Indians who were related to these Long Island people soon controlled the wampum trade. They supplied the nations of the interior with their wampum, which was exchanged for furs from the western Indians.

Our Iroquois People used wampum for official purposes as well as for religious ceremonies. According to tradition, wampum was introduced to the Iroquois by Hiawatha (Ayonwatha) at the time of the founding of the League of the Five Nations. Hiawatha decreed and regulated its use. He taught the Five Nations that wampum should bring peace and bind peace and take the place of blood. He first introduced it to the Mohawks, and after telling the Council of its use, his co-worker, Deganawidah, used wampum to console or wipe away the tears of Hiawatha, whose heart was heavy because of the loss of his daughters. This was the first Condolence Ceremony and it has existed without change down to the present day. The first wampum used by Ayonwatha was made from fresh water shells. There are traditions among the Iroquois that before shell wampum was known to the Five Nations wampum was made from wood stained black and white. An Onondaga tradition says that porcupine quills were first used as wampum. A Mohawk tradition says that the first wampum was made from the quills of the eagle. At any rate, Ayonwatha seems to have been the first to use shell wampum for ceremonial pur­poses.

As wampum became more plentiful, it was used more and more until it came to be regarded as something sacred. Wampum strings served as credentials or as a certificate of authority. No Iroquois chief would listen to a messenger or pay attention to a report until he received official information through a runner who carried the proper wampum string or belt. Wampum guaranteed a message or a promise. Treaties meant nothing unless they were accompanied by wampum. Belts were given and received at treaties as seals of friend­ship.

No Iroquois individual or nation would think of breaking a word or treaty if the treaty was made over a sacred wampum belt. With every important treaty, wampum belts were exchanged. Sometimes as many as forty belts were exchanged at a single council. Likewise, every law passed by the Iroquois Council was recorded with a certain string or belt of wampum. The treaty or law that went with the wampum was memorized by certain trained individuals.

Twice a year at a special council, a Wampum Keeper would gath­er the people and, taking each wampum belt and or string, would hold it aloft so that all could see. He would then recite the message or law that went with the particular wampum that he held. After recit­ing its meaning, the belt or string was passed from hand to hand among the entire gathering so that its design and meaning would always be remembered. At that time younger warriors who had been selected because of their keen minds were given special training and instruction by the older wampum keepers. These young men would someday become Keepers of the Wampum, and it was necessary that their training started early. It has been recorded by early white men that a wampum keeper, several years after the treaty had been made, could hold the belt that went with the treaty and repeat the entire message word for word without error, even though some of the treaties and promises were quite lengthy.

It is said that before wampum was introduced the wing of an eagle was given to sanction a treaty. In historical times beaver skins and painted sticks were used to replace wampum when it was scarce.

Six strings of purple wampum united at one end stand for the Six Nations. When this was laid in a circle, the council was open. When it was taken up, it meant that the council was over. Each nation of the Iroquois has a special string of wampum that represents their people. These are as follows:

Mohawks—six strings tied together, two purple beads to one

Onondagas—four strings tied together, two purple beads to one white.

While reading a wampum belt, special care was made to hold the belt correctly. Usually when the message or speech was half finished, the speaker would turn the belt over.

A certain amount of wampum could ransom a murderer or captured prisoner. 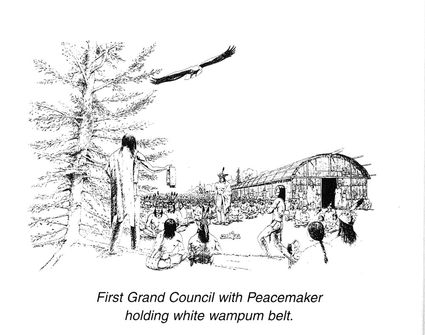 White wampum was the emblem of something good, of peace and purity. Purple wampum meant more important affairs of a civic nature.

Wampum is still used in the ceremony of raising up a new Chief and in the Iroquois Thanksgivings and Kariwiio Cere­monies.

Every Chief of the Confederacy and every Clan Mother has a certain string or strings of wampum that is their certificate of office.