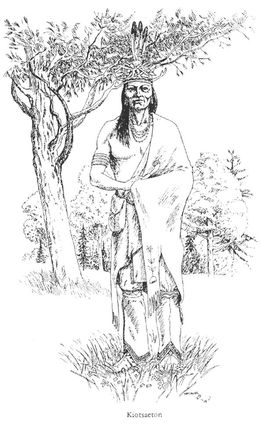 Now we turn our thoughts to the Creator, or Great Spirit, and send greetings and thanks for all the gifts of Creation. Everything we need to live a good life is here on this Mother Earth. For all the love that is still around us, we gather our minds together as one and send our choicest words of greeting and thanks to the Creator.

The link between the Creator and the Haudenosaunee has been a special one. The Creator assigned to all of the creatures of Creation, the responsibilities to protect and keep the universe. As Haudenosaunee, we believe that the spiritual world is not distant from the Earth but is part of our existence. The Creator does not live in some far distant heaven, but is here with us. The Creator visits and judges us using many different guises, to see if we are keeping his instructions. We keep faith with the instructions of the Creator by fulfilling our responsibilities to the Earth, Creation, and all things named.

To the Haudenosaunee, the Creator is neither good or evil, but is the Creator of things. Our Mother Earth, on which we live, has everything that humans could want or need to sustain themselves. We tell the story of the Good/Light Brother and the Bad/Dark Brother who helped to finish the Creation. Their action helped show the balance and harmony in Creation. If we look at the rose as a creature of Creation, we immediately see the beautiful flower and smell the wonderful fragrance. Its beauty is overwhelming. We say that the Light Brother created the rose’s good traits. However, the Dark Brother, seeing this, added thorns to the rose, which can prick and hurt us. This was interpreted as being bad, because it can hurt human beings. However, if we look from the view point of the rose, its fragrance and color are to attract bees and other pollinating insects, so that the rose can reproduce. These colors and fragrances also attract large animals which want to pick the flower and hurt the plant, therefore, the thorns protect the rose from harm. To the rose, the gifts from the Bad/Dark Brother were very good for it. Both the thorns and the beauty are part of the rose. Neither is good or bad in the eyes of the Creator.

In the Creation, the need to struggle is seen as a necessary part of life. Human beings were given the intelligence and free will to be able to appreciate the beauty of Creation. Our specific instructions were to protect the lands and live in harmony with ourselves and all other living things. This didn’t mean that we could not harm another living creature, since we require food from the plants and animals, but that we were to respect the sacrifice made by the animals and plants. These sacrifices were part of the Creator’s instruction to the plants and animals. They were to care for the humans as if they were part of their families. We, the human beings, in turn, would respect the animals and plants as part of our family with the Earth as the Mother of all things.

When I questioned my grandfather about the concept of the Family of the Earth, I wanted to know if all animals, even spiders, were part of my family, my brothers or sisters. He told me that all things in Creation were part of my family, animals, plants, sky, moon, Earth, and rocks. He said that we were not the older brothers of Creation, but the younger brothers. We, like how young brothers sometimes do, did not know how to act in Creation, but by observing the rest of Creation, we would learn the natural laws and how to act. As younger brothers of Creation, we were dependent on the rest of our family for our existence. If we, as the younger brothers, were to disappear from the Earth, the Earth and the family would continue on. However, if our Family and the Earth were to leave us, we could not exist.

So each animal, plant, and rock in the universe has a purpose and instructions from the Creator of all things and is striving to carry out their responsibilities. Our successes lead to the generation of happiness, while our failures lead to sadness. Whenever we are able to live in balance and harmony with each other and the environment, we create beauty and happiness. Ugliness and sadness is created by strife and imbalance. Our responsibility to the Creator is to live in harmony and thereby generate more beauty. As Haudenosaunee, we have always striven for harmony and through this, add to the beauty of Creation.

The Haudenosaunee believed that our system of governance must reflect our belief in balance and harmony. We believe, not in the equality of all people, but in the equality of all of Creation. The animals, plants, rocks, and elements have as much right to exist as people do. We believed that, by observing the natural laws of the Earth, we would be able to learn the right way to live. As we studied the environment, we came to believe that we could achieve a state in which we could understand the instructions of the Creator. We called this state the “Good Mind.” In this state of the “Good Mind,” the proper way to act, feel, and live became obvious to the people and the individuals. The “Sick Mind” could only perceive the patterns of chaos and ugliness and grew sick of living with the Earth or their own people. As people learned how to use the “Good Mind,” great teachers began to teach these techniques to our people. Respect, Power, and Peace became actions needed to carry out the instructions of the Creator. In legend, our people say that the Creator sent these teachers, at critical points, to our people so that we would be able to learn these lessons deeply and thoroughly. Our ceremonies were designed to help us remember these lessons.

The development of the concepts of harmony, balance, and the Good Mind required that our people must think in long time frames. We understand that it requires time for a person to learn the lessons necessary for them to live in the world. They must learn the techniques needed to observe the natural laws of the world and then how to apply them to every day life. Every day in the short term, we must constantly remind ourselves about our responsibilities. These responsibilities extend, not only to the Earth and all Creation, but also to ourselves, our family, our nation, our Confederacy, and to the spiritual world. We say that we must consider the seven generations in all things we plan to do. Seven generations repre­sents all the generations one person can know. As a child, I can know my parents, grandparents and perhaps my great grand­parent. I will have my own children, grand­children, and perhaps great grandchildren. It is only reasonable therefore, to plan for seven generations in all our actions and deeds. By doing so, we can protect our immediate family. In terms of the Creation and the Creator, the Haudenosaunee concept of planning for seven generations represent only a small period of time in Creation, but still is a good attempt at fulfilling our responsibilities.

As Haudenosaunee, we understand that the time needed to make decisions at any of these levels requires ever increasing time. An individual can decide relatively quickly on some actions. However, a family may require double the time to come to this same type of decision. At the Confederacy level, the decision may require years of discussion. The difference in decision times, while frustrating to the individual, is good for the Confederacy as a whole. It sets up a system which generates social and political tension and allows for change. Consensus making processes, while time consuming, generate responsibility, respect and equity for the decision makers. If spend ten days planning an event with everyone, the one day event will be successful and we may need a minimal amount of time for some follow-up or repair time for the mistakes we did make. However, if we spend one day planning the one day event, we will probably require 20-30 days to fix up all the mistakes made. It is always better to spend a large amount of planning and consensus building time, then to spend double that amount of time repairing damage. 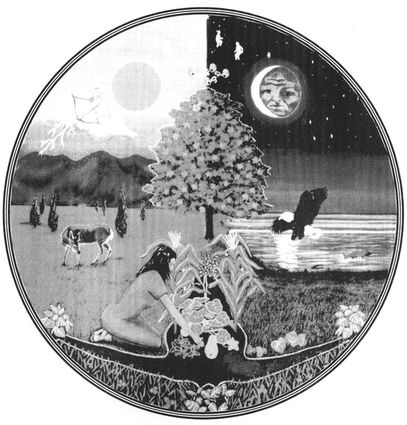 Within our communities, everyone has a purpose. Women, men, children, and elders each have a responsibility in carrying out their purpose to the community. The purpose of the child is linked to the elders and all other people in the community. The community, as a whole, has a responsibility to the individuals of the community, no matter what their purpose. The youngest child, carrying water for the family table, is fulfilling his/her responsibility to the family. In the Haudenosaunee world, women were held in high regard, because of their responsibilities to the Earth, future generations, the family, community, Nation, and Confederacy. The high regard did not mean that they were better than everyone else. Only that people respect them for carrying out these heavy responsi­bilities. Men had high regard and were given task or work which suited their abilities and strengths. In this way, the Haudenosaunee built on the strength or differences of the community, while respecting the responsibilities of the individual. This led to a strong community. As the communities came together using this same idea, it created strong nations and lastly, as nations came together, this created a strong Confederacy. The strength of the Haudenosaunee comes not from everyone knowing their place or trying to be the same in society but from everyone knowing their purpose and carrying out their responsibil­ities.