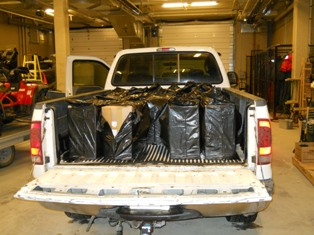 January 21st, 2012, Bradley COOKE (age 39) from Akwesasne, Ontario, was charged under the Excise Act, 2001 after being stopped at Cornwall’s Port of Entry with nineteen (19) cases of contraband cigarettes. COOKE’s 2011 Ford F-250 pickup truck was seized.

On January 26th, 2012, while conducting surveillance in the South Glengarry, Ontario area, members of the Cornwall Regional Task Force (CRTF) observed a vessel drop off a load of contraband along the shores of the St. Lawrence River. As members approached the area, the vessel departed and members observed a pickup truck loaded with contraband tobacco and two males fleeing the area on foot. A short distance away, the two males were apprehended without incident. Adam PATAKY (age 18) and Conner THOMPSON (age 18) both from Cornwall, Ontario have been charged under Section 32(1) Excise Act, 2001. Their conveyance, a Ford pickup, along with twenty-five (25) cases of contraband cigarettes was seized.

On January 30th, 2012, Ateronhiatakon Francis BOOTS (age 63) from Akwesasne, Ontario, was arrested at Cornwall’s POE on strength of an outstanding warrant for his failing to appear at his sentencing date in December 2011. The sentencing stems from BOOTS’ October 2009 Excise Act offence. BOOTS was held for a bail hearing.

On January 31st, 2012, while on patrol, CRTF members observed a suspicious black truck in the city’s east end. When members attempted to stop the vehicle for further investigation, the driver of the vehicle evaded police by driving through a red light and traveled the wrong way on a one-way street. The driver, Scott Joel JULIEN (age 23) from Martintown, Ontario, jumped out of the moving vehicle and fled on foot. The vehicle came to rest, without damage, at the Bob Turner arena. The OPP K-9 unit was dispatched and after a short search, JULIEN was apprehended at a nearby residence without incident. Forty-one (41) cases of contraband cigarettes were seized along with a black GMC Sierra pickup.

“This incident was brought to a successful conclusion”, states Insp. Kimpan, OIC Cornwall RTF, “due to the collaborative efforts of our ongoing partnerships.”

Later this date, Cornwall Community Police Service (CCPS) members received a call from a security guard at the Civic Complex, Cornwall, Ontario, advising that he had observed three (3) vehicles being loaded with tobacco from the shoreline. CCPS responded to the complaint, however, all involved parties had fled the scene when they observed the security guard. CRTF members attended and seized the vehicles, as they were full of contraband product. In addition to the three (3) vehicles, a total of 32 cases of unstamped tobacco cigarettes were seized.

On February 2nd, 2012, CRTF members observed the occupants of a vessel deliver three (3) cases of contraband cigarettes to the dock located near the Monte Carlo Motel, Cornwall, Ontario. Members arrested the two (2) individuals on the dock, however, the vessel departed before members arrived. In this matter, three (3) cases of contraband cigarettes were seized along with a vehicle. As these individuals have not yet been formally charged, their names are being withheld.

Later that day, further to an investigation conducted by CBSA officials at Cornwall’s POE, Alaina POINT (age 24) and Aaneva LAZORE (age 20), both from Cornwall, Ontario, were found to be in possession of twelve (1.75 litre) bottles of unlawfully imported liquor. Upon notification by CBSA, CRTF members attended the POE, seized the liquor and arrested both females. Along with the liquor, their vehicle was seized as a conveyance. Both face charges under Section 88(1) of the Excise Act, 2001.

The individuals noted above, who have been charged under the provisions of the Excise Act 2001, also face charges under the provincial Tobacco Tax Act for possession of unmarked cigarettes.

Cornwall, ON- Lynn Pierce, 48 of Akwesasne was arrested on the 9th of February, 2012. She was bound by a probation order with the condition to remain in the jurisdiction of the court, which is the Province of Ontario.  It is alleged that on the 9th of February, 2012 she reported to the Canadian Boarder Service Agency that she had attended the United States. She was detained and turned over to the Cornwall Community Police Service Patrol Division. She was charged with breach of probation order and released to appear in court on the 27th of March, 2012.

Cornwall, ON- Tehoroniate Nanticoke, 31 of Akwesasne was arrested on the 14th of February, 2012. It is alleged that on the 14th of February, 2012 he was detained at the Canadian Boarder Service Agency when he was observed to be operating a motor vehicle while he was prohibited driving Canada wide. Police were contacted and an investigation followed. He was charged with drive while suspended and released to appear in court on the 1st of March, 2012.

Burns had been granted an adjournment in contemplation of dismissal with a stipulation she perform the community service to satisfy a petit larceny charge. She had been charged on April 22, 2011 with shoplifting from the Dollar General store.

She was arraigned by Massena Village Justice Eric J. Gustafson on the warrant and ordered to complete the community service by Feb. 28. 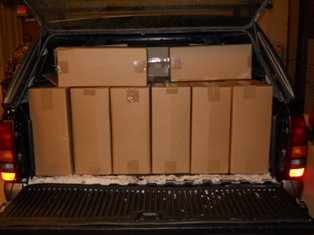