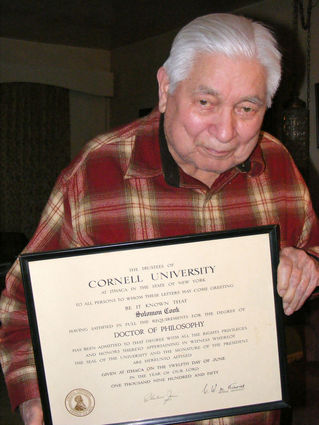 It was an interesting visit with a very gifted man this past week.  Solomon Cook was born January 8, 1920 at the home of his parents, Kahawihson McDonald and Angus Taieroniote Cook. Solomon grew up with 7 siblings, including one more that his parents raised. He and his sister, Cecilia Konwakenni, who is now 90, are the only survivors of the family. His other siblings who have all passed away are: Christine, Ann Kaniharonkwas, Lillian Skawennetsi, John Kanonwatase Jimmy Tehonieien, and most recently, Joe who passed in October of 2011.

Needless to say arriving into such a large family Solomon had an interesting life. He shared some times as he laughed while he spoke of them. Growing up on a farm was hard work as some have fortunately experienced this. His brother John was a wild one and used to hang out with his friend John J. before they both settled down.  These two went out almost every night in John’s Model T Ford, running on a tank of $.25 a gallon fuel.  During the day the friends would sleep in the hay mound, “sleeping it off” from the night before.  Well, the father was looking for John and noticed that he hadn’t been pitching in with the chores. When he saw where he was, he took an ax to the car and sliced all 4 tires. His anger was in each swing of that ax. After realizing what he had actually done, he did replace all 4 tires since he said he didn’t know what got into him.

Solomon talked about how his grandfather and father obtained this huge farm. He had two uncles that each paid a dollar a day until the farm and hundreds of acres were paid off.

His father groomed up his horse one day and he dressed up in his best clothes and went for a ride with his buggy all hitched up. He had seen a beautiful girl at a dance and became interested in asking for her hand in marriage. He first had to request permission from the girl’s father. When he drove into old McDonalds farm, he was asked what was on his mind. He told his wife and they discussed it, all agreed and the girl also agreed. One man said he would supply the wine and another said he would supply the music once the word got out about the upcoming wedding.  This was so sweet!  Solomon said,” in those days for a wedding, it starts on a Monday and lasts all week”.  The marriage took place in July, 1903.

As a child of 6, it was time for Solomon to attend school.  The building they went to was in the same location where Kateri Hall is now. It was a huge building and had many steps. He remained at that school for 6 years obtaining his elementary education. After that, the students went on to grade 6, 7and 8 in another building not too far from his first school.  Solomon later enrolled at Massena Central School for his high school education because he had heard from a friend that there was a teacher there who taught agriculture, which was Solomon’s main interest. He met the teacher, Red White, who was the first teacher to really encourage Solomon to go on to college, which he did in 1934 after graduating high school. A close bond was developed between Red and Solomon as Solomon pursued college life at Cornell University in Ithaca.

During that era the only expense was for books, room and board. Solomon worked odd jobs to earn money for his livelihood. He used to babysit to earn his room and board from a veterinarian teacher who lived two miles from campus. He also did some house cleaning and washing pots and pans. Solomon ran to school each day as he used to be a runner in high school and was accustomed to it. Well, one day as he was going along, a friend of his stopped beside him. He was showing Sol the bike he had pieced together from spare parts. “Come on, get on I’ll give you a ride to school”, said the friend. “Oh, no” said Solomon, “it’s alright, I’ll run.” “Get on, I’m not leaving until you do,” said his friend once again. So Solomon agreed and jumped up on the handlebars. As they were going down a slope, his friend said, “Oh yeah, I have no brakes”.   We laughed together as anyone can imagine, these two boys weaving in and around cars as they rode to school.  He is another friend who kept in touch after all those years of Cornell together.

All that was now 70 years ago since Solomon entered Cornell. He had earned his BA, Masters in Agriculture Education (1938-1942) and eventually his Doctorate in Philosophy (1950). What a wonderful undertaking on the part of a wonderful man.  So, with all this, Solomon was ready to explore the world. He had always wished to help Native Americans in Agriculture.  He went on to South Dakota to work and enjoyed that so very much.  At first his boss told him, “crops cannot grow here.” So Solomon began doing research about the climates and the soil.  He said that “by planting earlier in the season instead of planting in the usual June, plants were able to survive the temperatures.”   Solomon planted his own garden and showed his boss. Beautiful vegetables were harvested and it was because he put the plants down in April instead. This produced a plentiful crop that so many people were surprised to see.  Solomon didn’t stay too much longer in South Dakota, but he was able to teach the people as well as his boss about the vegetables.

“In 1944 I began teaching after the NY State Education Department called me to work as a teacher of Agriculture. My placement was in Lisbon, New York.  Because I had been working on the farm prior to that time, I was exempt from the services. Once I began to teach I was drafted into the military. Many of us from Akweasne had to go to Utica for our physicals.  There were over 200 men there. The person in charge asked if anyone wanted to go to the Navy and many of us raised our hand. They were only taking three and I ended up being chosen.  My deployment was to Japan in the beginning, as well as the Philippines. Our job was to mine sweep and I saw so much that I wish I hadn’t. If you stepped in the wrong spot a mine could blow. We were in Hiroshima a month after it was bombed, August 5, 1945. Our stay there was 5 months,” Solomon recalls.

When Solomon came back to U.S. soil he bought a house, which he continues to live in today on Route 37 here in Akwesasne. (This may have taken place before his service duty.)  He wanted to buy this house and went to get a loan for it in Malone. He saw the man in charge and asked if he could get a loan. At first the man said, “We don’t lend money to Indians.”   This man’s son was a classmate to Solomon and knew him before he even spoke.  “My son talked about you so much and said if I ever saw you, I would know right away,” said the loaner.  “I don’t have any collateral,” hesitated Solomon.    The man replied, “Your education at Cornell is your collateral, how much do you need?”

When Solomon and his wife Mary left South Dakota Solomon’s next job was at Barker, NY where he worked for two years. The Administrator asked him to stay on and continue to work as a teacher for Agriculture. By this time Sol was ready to come home. In 1953, before coming back to Akwesasne to live, he and his wife were blessed with a beautiful baby girl named Michelle.  Mary’s mother came to help them and stayed for two months. After the house purchase and moving home with his family, Solomon received an offer by Salmon River School.  They wanted him to teach Agriculture, which he did, and soon became a counselor as well. His work span there was for about 10 years.  When the principal asked Solomon to be his assistant administrator, he turned down the offer after thanking him.  “I want to go home now and work in the soil, it is my life and I always enjoyed farming,” said Solomon.  As many of us know, he did what he enjoyed most. We have tasted his delicious vegetable crops and fruits as well as the visits he provided at his stand.

He has a wonderful family and as he spoke about them he smiled.  He is very proud of his daughters Michelle and Beverly, with their husbands and his grandchildren. As many Akwesasronon know, Michelle is a doctor in the Buffalo area and Beverly works with young children in education.  Solomon’s wife was Mary Jacobs, sister to Father Jacobs, who have both passed away.

It was so nice to visit Dr. Solomon Cook at his home for this interview.  The determination and drive within him to get his education is so admirable and strong.  He is a true living example of success.  The respect he has earned is evidence of a job well done in this community, as well as the other places he has visited.  He knew what he wanted from life and that was to provide for his family and to make sure his many long years of study and sacrifices made during his early years earned himself degrees from Cornell with hard work and honors.  Today, we honor you, Dr. Solomon Cook!

Added note:  On February 24th, Solomon will be inducted into the Hall of Fame at St. Lawrence University as being a committee member and contributor.  A ceremony will take place and more information will be forthcoming.