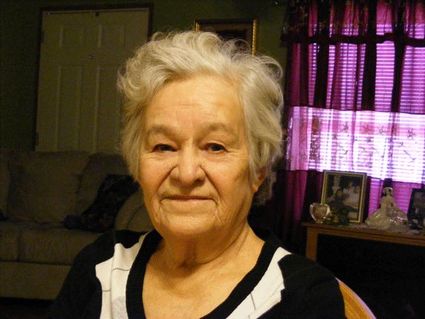 This week’s elder visit was with Mary J. Francis, a long time resident of Kana:takon.  Mary is well known and respected by so many people and we are definitely honored to hear her words about parts of her life. She was born August 25, 1927 to Thomas and Louise Zachary Herne on the southern portion of Ahkwesahsne.  Mary had many brothers and sisters including a twin brother Johnny, and has outlived all of them. There is one more, Vicky, who became just like her sister after Mary’s parents raised her.

“We have become so close since we are the only remaining family members of the Tom and Louise Herne family.  Vicky now lives in Miami, Florida,” said Mary.

Mary spoke of her twin brother Johnny when he joined the service, not of age but he managed to get in to serve his country while WWII was happening.

“While he was stationed at Marianna Island, his true age came out but they couldn’t send him back,” said Mary as she laughed. “So on his grave stone he is one year older and we are twins.”

Mary and her late husband Mike raised 12 children and one grand-daughter (now deceased).

“I enjoy having all our children living nearby, they check up on me often,” said Mary.  “They have all done well with their lives, especially when we raised them the best we could and always hoped they would succeed.  All a mother and father can do is sit back and hope that when mistakes are made, that they can better themselves.  As they grew we always stressed that they respect elders no matter who it was.... and I know they do.”

“They are always available when someone needs help, I think they’ve taken my place in so many ways because I have always tried to help other people as well,” said Mary.  “I am so proud of each of our children.”

Valerie, Mike, Robin, Donna, LeeAnn, David, John, Joe, Cindy, Tom, Tracy and Cathy are the names of all her children.  With a smile Mary said,

“They are all pretty smart, I wonder who they take after?”

Mary is so happy that John is recovering so well and saying what a blessing it was to have his sister-in-law, Barbara match-up and be able to donate her kidney to him. “She is also doing wonders in her healing too, thank God,” added Mary.

“It was great growing up the way we did and as I remember growing up on State Road, you look around and the feeling was always there that everyone was equal. People in those days helped each other a lot but it isn’t like that anymore. As long as you had a warm house and food to eat, along with knowing that your family cared for you, life was good,” shared Mary.  “When we started school, it was a little one-room school house on State Road across from the Dreamcrafters Shop area.  Our teacher was Mrs. Gorrow.  Our classroom had a potbelly woodstove and rows of wooden desks and our mode of traveling to school was walking. We didn’t think anything of it, it was the only way – plus it was fun.  Our Christmas time was fun too, as we made our own decorations with popcorn and chains from colored paper.  My brothers, sisters and I had so much fun,” recalled Mary.  “For our gifts we received a stocking filled with an apple, orange and some nuts in which we were happy with.  Nowadays, the kids tell YOU what they want.”

Mary’s favorite subject in school was history. She didn’t graduate from high school, but she and her friends reached the age where they wanted to work and the spinach fields were hiring many young people in Malone.  She had no idea that her husband-to-be was also working at the same time. It was so nice that with their pay they could get things for their families such as flour, sugar and butter along with other things. It wasn’t much money, but it felt good to them that they could pitch in to help family.

Mary’s travels have taken her many places and she was active in her community for many years. Even to this day, she has been asked to serve on committees but she tells them “no.”  Now is her time to spend as she wishes and to include the hobbies she enjoys. Cooking is probably her favorite followed by reading, crocheting and working on puzzles.  Her father was so fascinated at watching her crochet that he gave her some money to buy more yarn. He enjoyed watching her and enjoyed her company by his bedside when he wasn’t well.

When asked “what is a biggest change you have noticed from your younger days to the present?”, Mary’s response is that she notices that too many children and young people are so into those hand-held games that they cannot communicate or visit anymore. Many times it looks like they totally ignore you while visiting.

Another change is the fact that so many things are so expensive now. The cost of food has risen so much as well as clothing. “Thank God I don’t have to dress all those kids anymore,” Mary added.

When she was raising her family, she remembers how well they listened and minded.  It sure has changed and she wondered...is it just that they don’t want to listen or they haven’t been taught? Mary shared a rule about her family and mealtime.  When it was mealtime, each of them knew to get home on time and no one ate until everyone showed up. Mary also looked back on how friends of her children would come to visit and shared meals with the Francis family.  It was a very welcoming home as well as being among generous and respected people. Mary always made sure all of the kids were fed; they were treated as her own all the time.

What a nice visit with a treasured lady. I have enjoyed every moment of our visit, niawenko:wa.