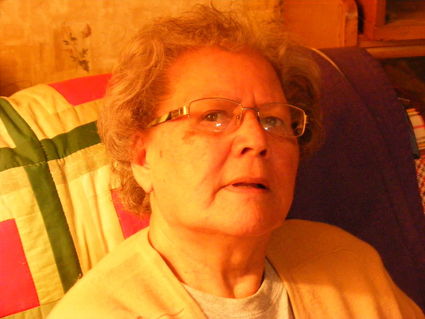 Katsitsientha Ella Louise (David) Cook provided such a welcoming visit at her home this week and shared many pieces of her life.  It is always a pleasant get together with her and with any member of her wonderful family.  Louise was born and raised on Kawehno:ke on July 20, 1933 to Julia Jacobs and Sam David.  She is the oldest of four children and her siblings are: Mabel, Gloria and J.R.  Mabel White is still teaching Kanienkeha as she did for most of her career, Gloria lives here in Ahkwesahsne and J.R resides in Tsi Snaihne.

Louise recalls a very hard life while growing up on Kawehno:ke, especially because it was during the Depression Era.  She remembers that her mom wasn’t well and was stricken with Tuberculosis.  Her mom Julia would walk with other people to various homes in Tsi Snaihne looking for medicine to help cure her.  Louise recalls these walks resembling a “train” as they followed her mother and she was usually at the tail end.  Sadly, her mom died at a very young age when Louise was only 8-years old.  After her mom passed away, Louise moved in with her Uncle Andrew and Aunt Maude. The other children were then pushed into an orphanage in Cornwall, but because there was Tuberculosis in the family home, they took the children to Ottawa to have them checked out.

Louise’s formal education began in a one-room school house at the West-End of Kawehno:ke.  Her teacher was Emily Peters before she became married to Lincoln White. While they were at that school, Louise eventually became such a good reader that she was able to assist the teacher to help the younger children with reading.

“I was a good reader and I guess this is where I got my first training to be a teacher,” said Louise.  “In this school house, there were 6-7 grade levels and each row was a grade level if you can imagine this.  In addition, all the children used to walk to school. There wasn’t any type of transportation but a horse drawn buggy if a family was lucky to have this.”

Upon leaving the Kawehno:ke school, Louise attended Cornwall- CCVS.  “We still had to walk to school to Cornwall and some days, our ski pants stayed wet on our legs all during the day,” said Louise. “It didn’t matter what the weather was, we still had to go.”

In school, Louise’s favorite subject continued to be reading – she remembers Mrs. Hutchinson, a teacher who taught students how to read recipes and patterns.  If a person could read, then they could do many things.  Louise became quite talented in her knowledge of sewing because she began to make suits, jackets and quilts.  Her children were really fortunate to receive handmade coats and jackets for school. Louise had a friend that lived nearby and they decided to go and get fabric at the Bazaar in Massena and together they invented the idea of a snowmobile suit before the manufacturers had them on the market.  That idea came about because their men complained of getting cold backs when their jackets would rise-up.  All they had to do was sew a jacket together to pants and add a long zipper and voila! There was the snowmobile suit and it kept them warm.

I asked Louise if she ever had any jobs as a young woman.  She thought for a moment and began to laugh.

“I always wanted to go to work at the spinach farms like so many other people were.  I asked my aunt and she said, you will have to ask your uncle,” said Louise. Her aunt Maude told her that if you really want to see if you want to try it, you can weed the carrots and cucumbers in her garden. “So off I went to weed the garden and I was working so hard as I picked the weeds. I finished and I entered the house.  To my aunt’s surprise, I had pulled all the carrots out!”

Louise tried so hard to impress her but didn’t.  Oh, she still wanted to try to go to work at the spinach farm so she asked again when her uncle came home.  Her uncle said she could try practicing by weeding the corn this time to see how she likes it.  Without hesitation, Louise weeded the corn.  She picked every little weed she could see and she was on her hands and knees.  As she went toward the house she fainted from the heat.

Poor Louise, needless to say, she didn’t go to work at the spinach farm.

I asked Louise wow did she met Joe (her late husband of 57-years of marriage).

“Well, during the summer, us girls would walk the Island on Sunday afternoons to a store owned by Mike and Agnes Boots.  It was fun to go there because they sold soda, French fries, candy and so on.  They even had a juke box and played music. Well, anyway, Abe was already coming over to the Island to see Elaine and he would bring some other guys with him,” said Louise. Joe was one of them and they began to get acquainted.  Louise said she couldn’t cross the bridge so that meant she couldn’t go anywhere. Joe went away to work with another man south of Plattsburgh and didn’t see him the rest of that Fall. Joe went picking apples and had to work at home on the family farm as well. When he returned to the Island and saw Louise again, he asked her to go to the movies in Massena. The answer was yes and that’s how it all began. She eventually became Mrs. Cook and they set up their home.

Together they have 4-children: Julia, Michael, Bernadette and Joyce. They also raised her sister’s son Darryl.  Darryl lived with them for about 15-years. All of their children have grown to be very successful and have made Louise and Joe so proud.  They also have 4-grandchildren: Hillary, Angus, Andrew and Peter and Louise absolutely enjoys all of them.  Louise’ hobbies are reading, quilting and gardening.

“I used to can also but I’ll have to cut back the amount since I’m alone now,” said Louise.  “When Joe first became ill with his heart problem, the Doctor gave us a list of foods that would benefit us and our health. Nutrition was most important and we knew we had to do a complete turn-around from what we were used to eating.  We learned how to manage a healthier nutritional lifestyle.  No more canned food, it really isn’t good for us.”

Louise said no more salt and that she hasn’t eaten salt pork for 45-years or so.  They had learned so much and she is thankful that she had Joe for so many years.

To conclude this visit, the question I asked was: what have you seen as a big change from your younger days to now?

“When I was still teaching at Salmon River, I noticed that many of the students and parents lacked the communication that is so important in families,” said Louise.  “It seemed like students couldn’t confide in their parents even when they needed help. Trust seemed to be lacking and I found this to be sad.  It also seemed that some parents were happy to get rid of their children when going to school.”

Another observation that she noticed is that today’s young men are not entering the armed services like they did in the past.  It just seems like they don’t want to serve their country. Back in the day, they were so proud to go.

This visit was so enjoyable and you have been so generous with your story.  Niawenko:wa for your time and sharing part of your day with us. You are an awesome lady, stay healthy and enjoy your new home and family.

Wow that is an amazing article. Niawen Kowa Louise for sharing your story.