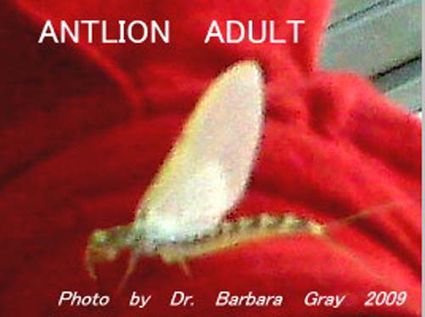 I have many fond memories of my childhood, and one of my favorites was the day my mom took my brother and me on an Antlion hunt.  I do not remember exactly the spot in Cold Spring, New York where we found the Antlion’s pit, but I do remember that the area had some sandy spots. After looking around for a while, my mom picked a single long, wide blade of grass.  She then kneeled down in front of the Antlion’s pit we found, and she told my brother and me to kneel down in front of the same pit and watch the bottom of the sand pit and the tip of the grass closely.

My mom took the blade of grass and ever so gently wiggled the tip of it in the center of the sand at the bottom of the pit. After what seemed forever but was only several seconds, we could see movement coming from the sand under the blade of grass. My mom kept gently tapping the sand when all of a sudden, in a tiny dust explosion, attached to the bottom of the blade of grass was this monstrous looking insect.  It did not hang onto the grass very long. It let go of the grass and swiftly disappeared back into the sand pit. WOW! We had just watched an Antlion trying to capture what it thought was an insect that had fallen into its trap.

Antlions are famous because of this very special habit performed by an Antlion’s larvae. It is an event that is hardly ever seen, since the Antlion larva spends its life buried in the sand. As soon as it finds a suitable patch of sandy ground, the larva quickly burrows into it backwards, digging out a cone-shaped pit. It then buries itself in the sand and sits at the very bottom waiting for an insect to tumble over the edge and slide down into the larva’s waiting mandibles. The insect is impaled on the larva’s mandibles, and dragged off into its lair and eaten.

Antlions dig a pit in the sand that looks like a cone. It is quite an engineering marvel. It is sloped just right so that once an ant or other insect falls into it, the sloped walls become unstable causing the prey to slide to the bottom of the pit. The prey cannot, no matter how hard it tries, climb out once it has fallen into the pit. If the prey does not completely fall down to the bottom and it tries to escape, the Antlion larvae will actually throw grains of sand at it, causing a mini-avalanche that quickly brings the victim within reach of its mandibles. Any crawling insects may fall into the trap and be eaten, but as its name suggests, the Antlion’s favorite food is ants.

Antlions are also called doodlebugs because of the spiraling wavy line they leave in the sand when they are looking for a spot to build their pit. They are somewhat rare, and the adults are often confused with dragonflies and damselflies. While it is true that they all have four large and highly veined translucent wings, there are some differences. Neuroptera (the lacewings and Antlions) have antennae and much softer bodies. The wings on the adult Antlions are equal in size. Adult Antlions (in their flying stage) rarely survive more than a few weeks, but their larvae are voracious predators that can live for up to three years.

The life cycle of the Antlion begins with egg laying. The female Antlion repeatedly taps the sand surface with the tip of her abdomen. Then she inserts her abdomen into the sand and lays an egg. NOTE: Amazingly, as I was writing this article, I found an adult Antlion sitting on a doorknob. WOW! What a coincidence. The picture is not as clear as I would have liked it to be. I only had a small camera with me and the veins in the wings do not show, but it does show you what an adult Antlion looks like. SEE PHOTO IN THIS ARTICLE.

Antlion larvae are unusual among the insects as they lack an anus. All the waste that is generated during their larval stage is safely stored inside them and is eventually emitted as meconium (a completely sealed case) by the newly emerged adult. The Antlion larvae when it is ready to become a flying adult makes a globular cocoon of sand stuck together with a fine silk that it spins from a slender spinneret at the posterior end its body. These cocoons are buried several centimeters deep in sand. They remain there for one month until the transformation into the sexually mature insect is complete. It then emerges from its case, leaving the pupal integument behind, and it climbs to the surface.  After about 20 minutes the adult’s wings become fully opened. It will then fly off to search for a mate.

Antlions are the larvae form of a group of insects belonging to the family Myrmeleontidae. The adult form is a winged insect resembling a dragonfly. Antlions stay in the larval form for up to 2 to 3 years. They then cocoon themselves and stay in it for about a month. Once they emerge as winged adults, they only live for another 1-2 months. The Antlion larvae are an average of about 1/2 inch fully grown. The adults are about 1 1/2 inches long.

If you are able to find an Antlion, I have seen a few pits with Antlions in them here at Akwesasne, you can keep it as a pet. If you do, be sure to be responsible and realize you need to feed it at least two times a day. When you cannot find ants or small insects around your homes, you can always get mealy worms at a local pet shop. Mealy worms can also be raised quite successfully at home.  To find them, Antlions prefer places where human feet never go so check in these types of places. Find a container such as plastic cups, and wash with lukewarm water only, do not use detergents, as they are toxic to the Antlion. Use fine play sand or collect some of the sand where you find your Antlion.

To capture an Antlion, scoop it out of it’s pit with a spoon or safer yet, use a sand sifter and put it in a temporary container. When you get home, gently put the Antlion in its new home. The sand should be at least 3 inches deep, and be sure to keep the container out of the hot sun. Let the insect get used to its new home for at least 24 hours before its first feeding. You need to feed your Antlion twice a day. Feed your Antlion: ants, fruit flies or mealworms that are smaller than the Antlion.  Eventually the insect will stop eating, and it will turn into a pupa, which should last about a month or two. You don’t have to give Antlions water because they get all the water they need from their food.

Be gentle, Antlions have bodies that are very vulnerable. Remember that they are insects, not throwaway items. Remember that an Antlion larva can usually live for up to 3 years before it pupates.  Once the Antlion cocoons, cover its home with netting to prevent the adult from escaping, and place a stick or small branch upright in the sand to provide a perch for the newly emerged adult. You can also do what I did.

I kept an Antlion for just the summer because I knew I would be too busy with schoolwork and sports for the rest of the year to take proper care of my pet. So, at the end of the summer, I took my Antlion back to where I found it, scooped out a crater and poured it gently back to close proximity of where I found it. It quickly buried itself and I felt good to know it would be able and capable of taking care of itself. Like other pets, Antlions need special love & care. You can order Antlions and Antlion Farms from the following Website: (http://www.antlionfarms.com/info___links ) NOTE: An Antlion’s mandibles can bite you and inflict a painful bite, so do not handle them with your bare hands or poke your fingers into the Antlion’s pit. If you want to have one, feed it, respect it, and watch and enjoy one of the Creator’s interesting creatures.

1. More than 225 species of Antlions have been identified in South America to date. In North America, there are only 89 known species.

2. The Antlion larva must have inspired the scriptwriters in one of the Star Wars films. In Return of the Jedi, the evil Jabba the Hut pushes his victims into a sand pit with a monster lying in wait at the bottom, exactly like an antlion larva.

3. The Antlion’s mandibles do more than simply pierce the victim-they also inject venom. If you were to shove your finger down to the bottom of an antlion’s pit, you could get a bite as painful as a wasp’s sting.

4. The antlion has 3 Pokemon characters modeled after it based on different parts of its metamorphosis; they are Trapinch, Vibrava, and Flygon.

5. The Antlion bears a remarkable similarity to the creature, Ceti Eel featured in Star Trek ll: The Wrath of Khan. I

6. The Sarlacc from Star Wars catches its prey in the same way as does the Antlion.

7. Mathematics and physics Jean-Bernard Roux’s has an on-line paper entitled “La physique du tas de sable”  (“The physics of a pile of sand”) It uses Antlion sand pits as a model to describe the way sand behaves in avalanches. The Web site is in French. 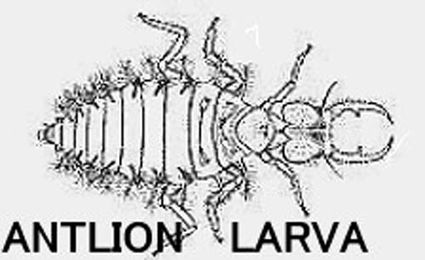 8. United States Antlion folklore dates back to the earliest days of colonization. The most common type of Antlion folklore takes the form of a “doodlebug.” Perhaps the most well known example of the doodlebug was published in 1876, when writer Mark Twain included one in his novel The Adventures of Tom Sawyer:  “Doodle-bug, doodle-bug, tell me what I want to know!”

8. A century after Twain’s Tom Sawyer, Antlions continue to stir the human imagination, even in outer space. Charles Duke, in 1972, when he was walking on the moon (near the Plum crater), so vivid were his childhood memories of doodlebugs that the Apollo 16 astronaut compared certain lunar craters to Antlion pits.