Kahniakehake (People of the Flint) 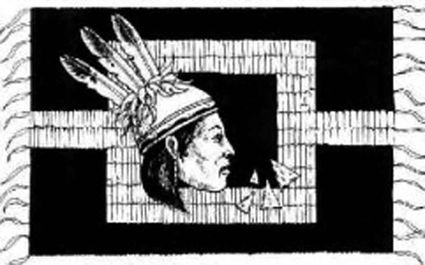 The Onkwehonweh name for the Mohawk is Kahniakehake, which is sometimes spelled Kanienkehaka and means People of the Flint. The Kahniakehake are one of the original Five Nations to accept the Peacemaker’s message and joined together with the Oneida, Onondaga, Seneca, and Cayuga to form the Haudenosaunee Confederacy, which is also known as the Iroquois Confederacy. Haudenosaunee translates to mean (People of the Longhouse), which refers to the type of homes built by the Haudenosaunee.

In the picture, the artist depicts the Kahniakehake by showing a man wearing a kastoweh (feathered hat) containing three upright eagle feathers. The man is placed on the eastern square of the Aiionwatha (Hiawatha) belt next to flint shards.

The Aiionwatha (Hiawatha) belt represents the founding of the Haudenosaunee Confederacy. When the Peacemaker came to the warring Five Nations, he carried with him the message of Kaianeraserakowa (the Great Law of Peace). The Peacemaker came to the Haudenosaunee with his message of Skennen (Peace), Kariwiio (The Good Word), and Kasatensera (strength), which contains the principles of peace, equality, respect, love, and justice. The Peacemaker envisioned the uniting of these Nations in peace as one extended Longhouse with each Nation having their own hearth fire. In other words, each Nation would have a shared sovereignty in the Haudenosaunee Confederacy, and the responsibility to protect the Peace, the Natural World, and the Future Generations to come, while retaining the sovereignty over their own Nations. The joining together of the Five Nations is perhaps the oldest example of nations uniting under a single form of government and spirituality. Interestingly, the Haudenosaunee draw no distinction between what is political and what is spiritual, for our spiritual leaders are also the political leaders.

The Mohawk are known as the Elder Brothers, which has significance when the Grand Council of Chiefs, composed of all fifty chiefs of the Haudenosaunee Confederacy, meet to discuss matters of importance to the entire Confederacy. The Mohawk were the first Nation to accept the Great Law of Peace from the Peacemaker as he and Aiionwatha (Hiawatha) journeyed to the Five Nations.

The Kahniakehake are known as the Keepers of the Eastern Door, for it is their duty to protect the Haudenosaunee Confederacy from trouble that may approach from the east. In the picture (above), the man is wearing a kastoweh, which is a feathered hat. One can identify the Nation that the wearer is from by the number of eagle feathers and the position of these feathers worn on the kastoweh.

Kahniakehake men wear three upright eagle feathers on their kastowehs. If the man were a chief of the Kahniakehake Nation, he would wear attached to his feathered hat deer antlers that symbolize his authority as one of the nine chiefs of the Mohawk Nation. The Mohawk also have Clan Mothers. Clan Mothers have many important duties and one duty is to choose who will become chief.

The Kahniakehake have three clans. The three clans are Turtle, Bear, and Wolf. The Haudenosaunee are matrilineal, which means that the clans are passed down from one’s mother. In other words, if your Mother is of the Bear clan, then you are of the Bear. If your father is of the Wolf clan, but your mother has no clan then you would have no clan, even though your father has a clan, because clans are passed on from mother to sons and daughters. Some mistakenly think that when a man marries a woman he becomes her clan, this is untrue. If you are born with a clan, that clan remains yours through out your life.