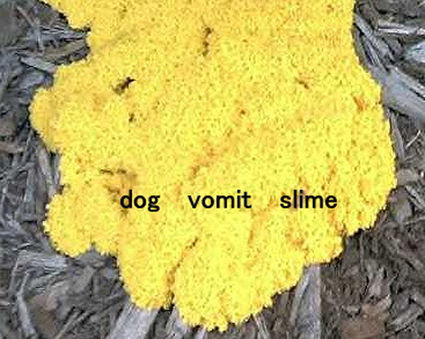 Several days ago I was taking the back roads to Massena hoping to find some yard sales.  About half way to Massena I finally spotted a sale. As I pulled into the driveway, I saw five people on the opposite side of the house staring intently down at something. I asked them what they were looking at, and they answered that they did not know what it was. They invited me over to take a look, I did, and what I saw was new to me and quite strange.

On a mulched area stood one of those lawn statues, a two and a half foot tall ceramic horse jockey. Looking like it was coming out from under it was some type of very weird looking “stuff” that seemed to be spreading across the mulched area. The “stuff” was about 3 1/2 feet long and almost 2 feet wide at its widest point. It was a very bright, bumpy looking almost flourescent yellow. One of the more inquisitive of the women there had stuck her fingers into it and under the yellow outer coat was a very white, about two inch, inner layer. Its consistency looked like a cross between pudding and jello. She said it was sort of slimy, a little bit sticky, and didn’t burn her fingers.  We were all thankful for her latter information.

The yellow upper layer was like the bright cadmium yellow I sometimes use when I paint. Since cadmium is poisonous, that yellow made me a little bit leery wondering if there wasn’t something, not so safe, leeching out from under the ground. On the other hand, I also did suspect it might be some type of fungus or mold. When I got home later I searched the Internet and sure enough it was a slime mold. It was the one they call, Dog Vomit Fungus or Scrambled Eggs. Its scientific name is Fuligo septica.

While there is the word fungus in its common name, it is not a fungus.  They are part of the Protista kingdom, which includes algae and protozoa. They are not plants, animals, or bacteria. Slime molds are completely different kinds of critters. They are one giant cell with millions of nucleii. They form when two spores come together and begin dividing into the sometimes large creeping blob of protoplasm surrounded by a single membrane. This plasmodium flows or streams slowly engulfing and consuming fungi and bacteria that are present on decaying plant matter. The movie “The Blob” owes its inspiration to plasmodium.

This particular slime mold, Dog Vomit fungus, appears after a soaking rain in spring or summer, and it appears seemingly overnight. It is found on mulched areas near homes and office buildings. It can also be found in forested areas on leaves, litter and rotting logs as well.  The smaller patches, when seen, are sometimes mistaken for dog vomit, hence the origin of its common name.  This particular slime mold is said to be harmless to people, pets, and plants. Believe it or not, in some parts of Mexico, the Native people gather it and scramble it like eggs - hence its other common name, “Scrambled eggs.” They call it “caca de luna.”  I will let you translate that for yourselves.  I MYSELF Would NOT eat it, and I probably also won’t eat scrambled eggs if I ever go to Mexico. Fuligo septica is said to be edible by some experts, but some slime molds may be posionous. For me, I go by the old adage, “Better safe than sorry.”

The bright color, that can sometimes be orange as well as yellow, is its first stage. In its next stage the slime mold matures into a hard mass that loses its bright color, and its inner mass becomes a dark brown. In this stage it is harder to notice. Its final stage, is the spore stage. Millions of spores are released by rain and wildlife in this stage. When you spot a slime mold, it can sometimes seem to be visibly moving. They really do not move very fast though. They move at a rate of about 1 millimetre an hour. Their fastest known speed is to move one inch per hour.

There are dozens of kinds of slime molds with different glowing colors. Eventually the slime molds, after releasing their spores, dry up and disappear. They have been doing this for millions of years. They are an ancient organism that has not changed much over time because what they do is still needed and it is still working.  They scavenge decaying materials. As they flow over and engulf their food, they ingest the edible and eject the inedible.  It is important to note that slime molds feed on plant-disease.

The appearance of these yellow blobs has many times, in the past,  alarmed people. Police, firefighters, and health officials will occasionally get calls when slime molds are spotted.  In 1973 in Dallas, Texas, a slime mold was taken for an alien invasion. There was a large outbreak of the strange growths in this town on peoples lawns. One of the growths appeared on a telephone pole and began to spread upward. Police and the Fire Department were called. The firefighters tried to subdue the growth with hoses, which only caused the mass to multiply and move further up the pole. People were in a panic. Finally a local university scientist came to the site and identified the oozing slimy, blob as the harmless Fuligo septica.

These giant amoebae have scared people when they awaken and find a strange seemingly glowing blob on their tent or rarely their bedroom floor that has crawled in overnight.  I guess they would be alarmed especially if they saw the movie, “The Blob.”  They probably feel like my Mother does who still has to use a see through shower curtain ever since she watched the movie, “Psycho” many years ago.

There is no way to prevent slime molds. They are a natural phenomenon that are actually good for your garden.  Slime molds break down plant matter aiding micro-organisms that are essential to healthy growing plants. If you are freaked out by its appearance, break it up and rake it out disposing the mulch. There is really no good way to get rid of slime molds permanently as their spores are everywhere waiting for the right conditions to become active. Remember they are harmless and they are another example of our precious Mother Earth taking care of herself